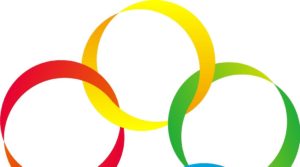 The power of the Olympic brand

The thought of the Olympics immediately brings visions of athletes in motion, speed; victorious fist pumps; tears of defeat; a rainbow of color; the pageantry of the opening and closing ceremonies; and athletes so proudly wrapped in the flag rich color of their homelands.

There is one image that universally evokes all of these images and emotions – the 5 ringed Olympics symbol.

It was designed in 1912 using the colors that appeared in all the national flags that competed in the Olympic Games that year. Prior to 1951, the Olympic handbook also stated that each color corresponded to a particular continent: yellow for Asia, blue for Europe, green for Australia and Oceania, black for Africa, and red for the Americas. This has since been removed as it was not the initial intention of the design in 1912. What was intended is clear. The design was simply to create a symbol of inclusion; the colors of flags, and all the world’s peoples, and the unification of a vast world geography.

The Olympic symbol is beautiful, memorable and simple. Not surprisingly, it is its simplicity that has made it so enduring. Can you think of other logos that have endured as effectively as the Olympics?

The power behind the Olympic brand 2
Scroll to top