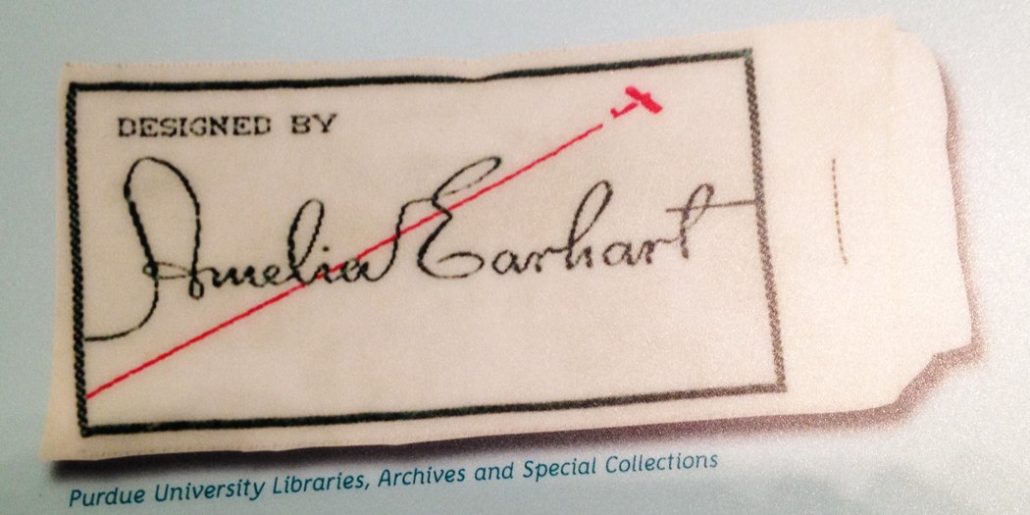 I was recently at the National Air and Space Museum in DC and was looking at an exhibit on Amelia Earhart.  As a child I admired her gumption. She took on convention, becoming the first woman to achieve fantastic feats in air travel. Of course, like all of us, I was also fascinated by the mystery that surrounds her death.

While meandering through the Amelia Earhart exhibit what caught my attention was a small label with her logo on it.  Not only was Ms. Earhart a ground breaker in flight, she was a fashion designer.  An accomplished seamstress since youth, in 1934 Amelia Earhart designed and brought to market her own line of fashion and luggage called Amelia Earhart Fashions. She was even an editor for Cosmopolitan Magazine.  Her brand was simple yet bold and captured her essence.

At that time Amelia won the minds and hearts of people all over the world and was known for her daring approach to flight and fashion.  She focused on washable fabrics, introduced the notion of separates – meaning you could buy a top and bottoms in different sizes, and made clothes more practical for everyday use. Each piece had a nod to her love of flight and these touches became part of her signature.

In her time she was able to push the boundaries of conventional roles, yet she was able to do it in such a way that she garnered the admiration of aviators and citizens alike.  Her focus was on possibility and a positive approach to all she did.  She inspired people to root for her.

What heroes of today are pushing boundaries and getting us to cheer them on?

The 5 steps to identifying your target audience
Scroll to top