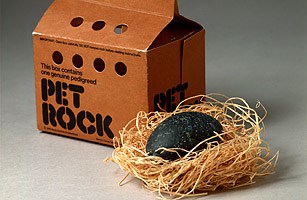 We recently read about the passing of Gary Dahl, The marketing genius who created the Pet Rock. That got us thinking about what was behind this famous fad. Dahl motivated more than a million people to pay $3.95 for an ordinary rock in a cardboard box that became, literally, a cultural touchstone for the 70’s. It was an era of happy self-indulgent escape from war and turmoil.

In the spring of 1975, Dahl was a struggling advertising copywriter. One evening at a bar with friends, the conversation turned to the responsibilities of pet ownership. Dahl proposed that a rock was the perfect pet because it required no effort. It did not need to be fed or walked, would never die or be disobedient.

Now here’s where the great marketing comes in… Dahl had a funny and clever idea – a pet that required no work – but he created an entire package which caught the nation’s imagination and appealed to our collective sense of humor. In addition to a smooth beach stone, customers received the Pet Rock Training Manual – a clever tongue-in-cheek step by step guide to care and ownership written by Dahl. He also packed the rock, tenderly cushioned in a straw nest, in a pet carrier-shaped box complete with air holes. Just as if it contained a living breathing animal.

People loved the entire package: rock, manual and carrier.  We would say today, Dahl had “buy-in.”

The 32-page official care and training manual was mock serious in tone and full of jokes and puns written as if the rock was an actual pet, including teaching your rock tricks like “sit” and “stay.”  Dahl cautioned that, “your new rock is a very sensitive pet and may be slightly traumatized from all the handling and shipping required in bringing the two of you together.”

The concept took off. People named their rocks, brought them to school, kept them on their desks at work.

Good timing and media exposure helped launch The Pet Rock. It was introduced at a huge summer gift show in time for Christmas orders. Dahl was featured in Newsweek and made two Tonight Show appearances.

Over a million rocks sold in just a few months for $3.95 each, making Gary Dahl a millionaire.

Long before the internet, The Pet Rock went viral sharing some key components of many modern day sensations:

After the trauma of the Vietnam War, the country yearned for relief and escape. A mental break from reality, like cute kitten videos today. The Pet Rock provided that. Everyone wanted to be part of the joke. It was fun. A national game anyone could play for just $3.95.

How to build your personal brand
Scroll to top